Tea, for me, is always associated with the train travels during our holidays and waking up at the early morning chant of the tea vendors - "chai garam.....garram chai". Soon, an extremely hot a brownish fluid with a lot of milk, sugar and tea dust (with some miniscule quantity floating on the surface) will be served in an earthen pot (bhaanr), which will then have to be held precariously by the edge and drunk with a lot of slurpy noise. As the juggernaut chugs it's way into Bihar and then UP, this delicacy will start having some more additives put into it - stuffs like cardamom (Elaichi), clove (Lavang) and cinnamon (Daal-chini) and the taste and fragrance getting overpowered by these additives.

My next strong association with tea is with the Mumbai "cutting" - which literally means one cup tea "cut" into two. One recollects a lovely music video called "Ek cutting chai" (link attached)


http://www.youtube.com/watch?v=P8PM85Cuhrg. This "cutting" personifies the Mumbai street food and mood - the immensely satisfying casualness (bindaas) with which the Mumbaikar drinks a "cutting" while munching a "Vada pao" ("zyada garlic chutney maarke bosss") while waiting for the next local at the train station.

While these teas are full of zest and gusto and work rather well as the morning "pick-up" drink, the tea drunk by the "purist" tea-lovers belong to an entirely different world. This is a world of fine china crockery, delicate and intricately painted teapots and the golden gleam and fragrance of a sublime fluid called tea. A world, where tea would necessarily have to be served in teapots, covered by tea-cozies, accompanied by scones or cucumber sandwiches and after the first cup, a stronger second cup ("Only half a cup, my dear - just to wash down the food and leave the right taste on the tongue") would be called for. And while these ladies and gentlemen would be sipping their second cup, the oblique evening light would come in through the stained glass windows and suspend this moment in time.

Over the years, I have been gradually moving away from my old favourite coffee and found a new love in tea. My increased age has not really contributed much to my wisdom but has certainly refined my epicurean sensibilities, allowing me to now enjoy the light Darjeeling Tea, brewed to perfection with a subtle mix of of colour, flavour and taste - and consumed without milk and sugar. I also started enjoying the Earl Grey tea - another classic - the tea with a lovely fragrance. I was, therefore, an eager participant in the tea tasting event which was being organised by some my wife's friends.

Technically this was a tea tasting event organised by some members of a foodie group called "Chef at Large" or CaL. My wife also belongs to this "for-whom-food-is-the-supreme-god"  group and by extension, I got invited to this event. The event was anchored by Anamika Singh, a member of CaL and a friend of my wife. Anamika is a thoroughbred tea commissionaire, being a tea estate owner's daughter who has spent her formative years in Darjeeling. She now partly looks after her father's tea estate at Kangra (Manjhee Valley http://www.manjheevalley.com/index.html) and has her own brand of "blended" tea sold under the name "Anandini Himalaya Tea". 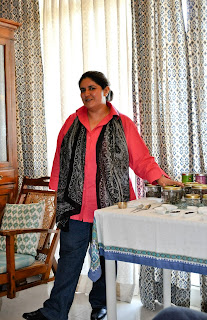 Anamika started with some basic clarifications on tea. The so called "herbal tea", it seems is not tea at all as it does not contain any tea leaves. The technical term for this is Tisane. Then comes the second category called the Infusions or blends which is tea with some other herbs or flowers into it (which, by the way, is what Anamika specializes in). And the third category is the classical tea which only contains tea leaves. 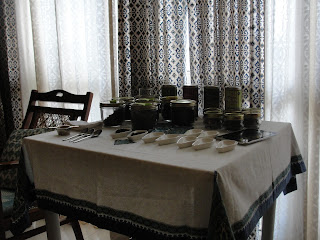 Tea, as per the classical definition, is a plant which originated in China. This, again, has two varieties - the small leaf one (Camellia Sinensis) and the broad leaf one (Camellia Assamica). The broad leaf one is usually processed through the CTC route, while the other one is uses the conventional production method and does the rolling at the final stages of production. The CTC (Crush Tear and Curl) route generates the grainy tea (what we bongs used to call as "dust tea") and is commonly used in tea bags. While the CTC  tea would brew a strong tea which will taste well with milk and sugar (and probably ginger also - the classical "Adrak-wali chai"), the connoisseurs swear by the traditional long leaf version. 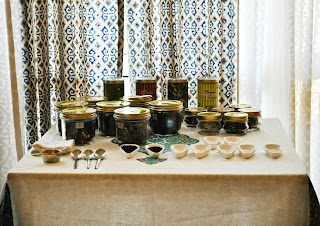 I finally got to know the difference between Black tea (traditional tea, completely oxidized), White tea (which is actually made from tea buds), Green tea (tea with minimum amount of oxidation) and Oolong tea (halfway between black and green). My erstwhile favorite "Earl Grey" got categorized under "blended tea" as this is basically a mix of black tea and Bergamot oil. Then comes the finer classification of "First Flush" (tea plucked between February and April) and "Second Flush" (tea plucked in Autumn). And last but not the least - we were introduced to a tea which is not the Darjeeling long leaf or the Assam CTC but the Kangra Valley tea - superb in its flavour and taste and poses a serious threat to the Darjeeling long leaf tea.

Anamika made us taste three of her blends. The first was a blend of first flush tea with lavender and lemon grass. The second was green tea with chamomile and rose hip. The third was again a green tea with Rhododendron and Himalayan Tulsi. I personally found the first one to be very "rich" while the second one to be incredibly refreshing and "lively" (if I may use this word to describe a tea). All three had the beautiful golden glow and a tinge of floral scent which blended beautifully with the tea. The process of tasting was quite similar to wine tasting in France - with teas being served in shot glasses and viewed & smelt before actually sipping it. 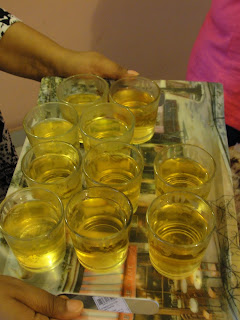 We were also taught how to make good tea. This involves boiling the water to 98 deg C (in layman's terms, this  means stop boiling the water the moment the smoke starts coming out), putting tea leaves in the tea pot first and then pouring water on it (yes - the age old debate of "water-over-tea-leaves" or "tea-leaves-added-to-boiling-water" has finally been resolved), covering it with a tea-cozy  , allowing it to infuse for 4 minutes and then strain and serve. We were warned that this 98 deg C also varies between different varieties of tea. And the extremely popular tea-maker's measurement thumb rule  (one teaspoon per head and one for the pot) was thrown out of the window. As per Anamika, the number of spoons of tea is approximately half the number of cups or could be equal to the number of cups (again depending on the type of tea).

In the course of her talk, Anamika was also passing around samples of her tea on nice flat open containers so that we get to see and smell the teas. She also dissected a solitary defenseless teabag and revealed it's innermost secrets - an act which reminded me of my messy biology practical days. We all took a solemn pledge never to touch a tea bag in our lives - a promise, I suspect, only few of us have been able to keep.

The event ended with the usual round of applause for the anchor and an unusual assortment of extremely sumptuous lot of food brought in by the participants. One has to acknowledge - there are certain distinct advantages of having hardcore foodies as participants ! 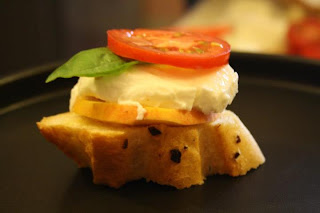 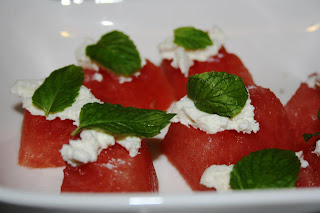 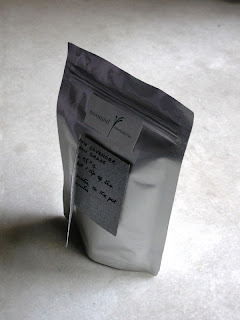 PS : We had also ordered for some blends as well as first flush on Anamika which we got last night - nicely packaged with "operating instructions" attached to the packets. One cup of this champagne of tea gave me enough inspiration to get off by back and finish this blog. Cheerio!